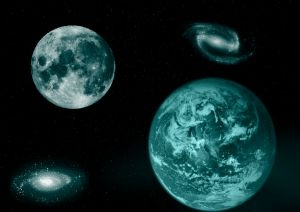 Fantasy can be one of the most fun types of stories to write. A writer has an idea for an awesome element, and a whole new world begins to speed through his imagination. But when he sits down to write, a lot of questions arise. In what world is the story taking place? The main character practices magic, so it can't be a world with the same rules as reality. What else changes? How do the people look? How do they interact?

The beauty of fantasy is the writer has full control over her world. She can make it as similar or foreign to the reality we know as she wants to. Still, things have to make sense within this world. It has to have rules. Here are some things to thing about when world-building.

1. Does it take place on Earth? The entire universe is at a writer's disposal, but there's nothing as comfortable as good old Earth. If Earth is your starting ground, then you have to consider: What time period (future, past, present)? What, if anything, is fundamentally different? What else changes because of this fundamental difference? Does it take place on a planet at all? What other objects might hold life (spaceships, asteroids, etc)? Is life on the new world carbon-based? Are there oceans? Only land with water underneath? No water at all? When considering toying with any of these, it's helpful to do some research on ecology to see how life has depended on certain characteristics, and then think how that life might have adapted without it.

2. What are the physics? Leaving Earth opens many doors to tweak essential characteristics humans have come to take for granted. Think about what fundamental differences a foreign planet might have, and how it might affect life. For example, the planet could be like the moon and not rotate, only showing one face to the sun at all times. There would be a permanent light side and dark side of the world, with drastically different climates. How would this affect civilizations on each side, or other life? Circadian rhythms and sleep? Maybe the entire planet has the same climate, or storms the size of oceans instead of small cities. Think about some of the fundamental things that make life (for us) livable (orbiting the sun, tides with the moon, ozone layer, atmosphere, ocean currents, rainfall, etc) and ask what might have to be different if each is changed. There are tons of factors here.

3. And what about the animals and the plants? Look at Earth dynamics. In animals, top predators tend to be bigger, breed less frequently, and have smaller litters, whereas heavily preyed upon animals are smaller, faster, and can produce a lot more offspring in a much shorter time to replace themselves. The types of animals present can affect a civilized society. It has been shown that humans in areas with easily domesticated animals have progressed in technology faster than those without. What are the migration patterns? How does this affect where civilization is located?

When coming up with specific plants or animals to populate your world, look to already existing examples on Earth. What's its life cycle look like? What specific adaptations does it have for its environment? Consider modeling after extinct animals from natural history as a starting point. Also, look to unique/interesting characteristics on our own planet. For example, lions will often kill the offspring of a lioness to put her in heat and to ensure the purity of the bloodline. Where can such a trait lead when you put your imagination to work? If magic is part of your world, how do animals play into it? Are wizards more abundant on certain parts of the glove due to the flora and fauna found there?

4. Abra Kadabrah? Whether or not to incorporate magic is a big decision. Is society built around the magical system or does it only affect a small subset of individuals? Does it divide social groups, like in Harry Potter? Is it subtle, like in Song of Ice and Fire? Who is able to use magic? Are there laws which govern magic? Does the magic system have a base in science? If so, does the explanation make sense? Are there magical creatures besides humans? Has magic progressed or retarded technological advances at all? Why and how so?

5. How is society structured? Are there universities? Is magic studied there? Are people designated different ranks in society based on bloodline, hardwork, military involvement? What is considered valuable (think more than just material: types of jobs, characteristics of beauty, art, etc, etc)? What's the form of government? Feudal, aristocratic, oligarchic, absolute ruler, democratic? Look to examples of how your own country and other countries do government and consider the major differences stemming from it. Does the structure you choose make sense with other elements (magic, Earth/not Earth, flora/fauna)?

6. What makes a man a man, and a woman a woman? Consider the seahorse, where the female produces the eggs but the male carries around the babies in its pouch to eventually give birth. What fundamental assumptions about ender roles might you want to turn on its head? Do women go to war? Are people assigned gender by life-path rather than genetics? Or maybe they are assigned by what society needs at the time? What are the expectations, how might they be violated, and what are the consequences?

Of course, there are TONS of things to consider when world-building, and an author can turn any little characteristic into a significant one with the right emphasis and crafting around it. These were just some of the main things I think about when I imagine foreign worlds. For those looking for even more thought-provocation, check out these: