5 Tips To Help You Write That Script 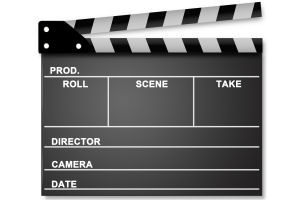 April is upon us, and that of course means that means that Script Frenzy is on! Script Frenzy is like NaNoWriMo, but instead of completing a novel in a month, the idea is to complete a script in a month. Writing a script can be just as tough, if not tougher, than writing a novel, but don’t get intimidated! With a little perseverance and a lot of white-out, you might just become the next Charlie (or Charlotte) Kaufman. Here are a few tips to help you get started on the road to production:

Before you even start, remember that part of how easy it is to read a script is how it’s presented. The usual convention for scripts is to have scene headings and character names in uppercase, with the speaker’s name above or to the left of his or her lines. Stage direction should be in italics, and words that have stress should be bolded. These rules vary from writer to writer but make sure to be consistent.

Writing is always fluid. How often have you been writing a story only to change plot details as you’re in the middle of a draft? It’s unavoidable that you’ll make revisions as you’re writing, but you can at least try to keep the revisions to a minimum by starting with a strong outline. Plan out the plot, the characters, the scenes, and maybe even the dialog. You don’t have to stick to your outline, but it’ll help you organize your initial thoughts.

Unlike stories or novels (well, most of them), scripts are written with the intention of being performed by real people. Keep this in mind as you’re writing. In novels it’s easier to sometimes suspend belief or use unconventional dialog, but in a performance, it’s a lot harder to pull off. Keep your scenes believable, your action consistent, and your dialog natural. It’s much easier to spot someone speaking stiltedly or doing something unbelievable or inconsistent when the real live person is doing it right in front of you.

It’s important to describe the scene, but always remember that your script should be driven by action and by dialog, not by description. Don’t write paragraphs describing the setting and don’t stuff your script with overwrought stage direction—all of that will get worked out as your script is turned into a production. If you start describing too much, you’ll end up with a novel, not a script!

In the end, participating in Script Frenzy is all about having fun. Don’t get too bogged down in the details, but think of it as good practice for when you really want to sit down and spend months writing and editing your dream script. Enjoy yourself and keep writing!

We've got a few more articles coming your way that will hopefully help you finish that script by the end of the month. Stay tuned!

Contest Entries, Critiquer Of The Month, And An Important New Policy Reading The Real Beowulf