Are You a Closet Synesthete? 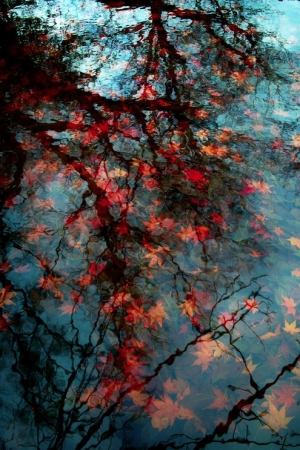 “A person with synesthesia might hear and taste her husband's voice as buttery golden brown, feel the flavor of food on her fingertips, sense the letter J as shimmering magenta or the number 5 as emerald green,” says the introduction to David Eagleman and Richard Cytowic’s 2009 book Wednesday Is Indigo Blue. The book explores the neuroscience and genetics behind the multisensory experience called synesthesia.

In a strange and compelling May 2008 article in Wired Magazine entitled “Poetry Comes from Our Tree-Climbing Ancestors”, Brandon Kelm asks where synesthesia comes from:

“Perhaps [synesthetes] are under the influence of hallucinogenic drugs…Or maybe they’re simply good with metaphors,” he suggests irreverently. Kelm is actually pretty close to the truth, according to neuroscientist V.S. Ramachandran, who stressed that “what appears as metaphor is a literal sensory experience for synesthetes.” This may explain why synesthesia is eight times more common among poets, artists, novelists and women than the general population. According to Eagleman and Cytowic, one in twenty people experiences synesthesia in a palpable form.

According to Ramachandran, synesthesia developed to help our ancestors climb trees. “Doing so requires a vision-informed mental map of the branches before us,” says Kelm, “as well as a touch-informed mental map of our limbs’ positions. Somehow these have to correlate. Which is quite a trick, when you think about it. Once early primates pulled off that feat of abstraction, it wasn’t long – evolutionarily speaking — before we were drawing on cave walls and whispering sweet nothings and holding Shakespeare revivals,” Kelm adds pithily.

Synesthesia comes from syn, for together, and aisthêsis, for sensation or perception in Greek. People with synesthesia experience a blending of the senses (e.g., sight and hearing) or of characteristics in a sense modality (e.g., associating colors with written letters). According to Eagleman and Cytowic synesthesia occurs when “a triggering stimulus evokes the automatic, involuntary, affect-laden, and conscious perception of a physical or conceptual property that differs from that of the trigger.” Synesthesia can involve not only the union of two or more different sense modalities, but also different dimensions of perception, such as spatial extension, personality or gender.

According to Lakoff and Johnson, "[t]he essence of metaphor is understanding and experiencing one kind of thing in terms of another". However, "... metaphor is not just a matter of language, that is, of mere words. ... [O]n the contrary, human thought processes are largely metaphorical" (emphasis in original).

The most compelling fiction arises when "truth" is portrayed obliquely, when objects or scenes are described through impression or what I call truth-interpretion, rather than through literal description. Think of it like a photographer, scoping a landscape, whose relief will be better defined through an oblique light. In my book The Fiction Writer I give the example of Janet Fitch's description of a "yellow sky", which is interesting already though described through one sense (vision). She goes on to explore more senses in a "lemon sky"; now you have suggestions of taste, smell and even texture. The metaphor "lemon" even suggests an emotional state.

Sol Stain gives an example of switching a sense to heighten a feeling:

Switching the sense from seeing to smelling, asserts Stain, creates a metaphor that not only describes the feeling in a fresh way but is more powerful and evocative.

We use synesthetic metaphors all the time, without thinking about it. Examples of cross-sensory (synesthetic) metaphors include: "loud shirt," "bitter wind" or "prickly laugh", "dark sounds", and "sweet smells". Many of these cross-sensory terms have been so often used to become cliché.

I first made intentional use of synesthesic metaphors in my space thriller trilogy The Splintered Universe. The main protagonist was the human galactic detective Rhea Hawke, who’d been tecked as a young girl with the ability to smell emotions. The premise opened up for me an entire suite of delicious possibilities to describe feelings and emotions through metaphoric imagery and cross-senses (another reason I so love the genre of science fiction).

In the following scene (from Book 1: Outer Diverse) Rhea goes against her first rule of engagement and lets a man into her life:

“Rhea, stay with me, here,” Serge whispered into my hair with sudden excitement. “Move in. Stay.” I smelled his enticing fragrance of strawberries and musk and knew what I wanted to say.

In the next scene, Rhea challenges new boyfriend, Serge, whose past she knows nothing about and he responds:

His face flushed and he smiled carelessly. “I must have dreamt it,” he said, emitting a burst of confusing aromas, a complex mixture of sweet meadow flowers, fishy smell of a lake, and the musk of bog and cottonwoods.

In the scene below, having determined that Serge is not an innocent bystander but a calculating spy, Rhea chases him to haul him into the precinct:

Then I spotted Serge. He’d run to the far end of the room.

Upon hearing me enter, he’d turned and met my gaze head on.

I knew he’d recognized me earlier during my pursuit. I’d smelled his spike of excitement. Now I felt him emit yet another smell, a rather pleasant mixture of fermenting fruit and young wine, and felt a thrill surge through me in response. I didn’t show it and pointed my MEC steadily at his chest with my lips pursed in venomous resolution. “A hunting dog will eventually lose its life on the mountain—old Chinese proverb.”

In the scene below, Serge has obviously gotten the upper hand and has immobilized Rhea :

With a forlorn expression he drew a trembling finger across my cheek, caressing me, and emitting his heady scent of musk and strawberries. I jerked away and he withdrew his hand with a sigh.

The Unity of the Senses

Synesthesia is far more common in children than adults. It is also thought to occur universally in infants during their first few weeks of life, reflecting a brain that is still in the process of differentiating its combined sensory experiences.

Mathematician and philosopher Gottfried Leibniz once wrote that our sense perceptions are occult qualities, whose familiarity does little to clarify their essential nature.

Writer Oyang Teng tells us that “long before brain imaging technology showed that even basic perceptual acts involve many different areas of the brain, common observation (and common sense) showed that there is no strict autonomy of any of the senses; rather, they each exist as interconnected aspects in a continuum of perception.”

In his 1927 paper, “The Unity of the Senses” Erich von Hornbostel adds that, “looking more closely, the apparent exception becomes the rule, and one must search in order to find the private property of any one sense.”

Cytowic and Eagleman argue that perception is already multisensory, though for most of us its multiple dimensions exist beyond the reach of consciousness. Reality, they point out, is more subjective than most people realize. Synesthesia is a window on the mind and brain; highlighting the amazing differences in the way people see the world. "The difference between synesthetic and nonsynesthetic brains is not whether cross talk exists" Cytowic and Eagleman note "but rather its degree."

How about that tingly feeling you get when you hear music you like, or the fact that you salivate when you see salty food? Synesthesia.

If you’re interested in whether you have more synesthesic tendencies than the average person, go to Kelm’s May 2008 article on Wired Magazine and take the test. Then let me know…