Keeping The Purple Out Of Your Prose

Keeping your prose razor-sharp can be hard. As writers, we’ve all felt the urge to describe something with lavish swaths of adjectives, laying down layer after layer of description like a builder slathering on more and more concrete. It’s what writing’s all about, we tell ourselves. It’s our job to make the reader see vivid images! It’s not writing if the reader doesn’t have to open a dictionary, right? Not so fast. 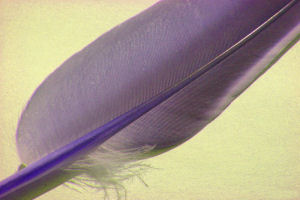 It turns out that writing for the sake of describing is a surprisingly common mistake that affects writers of all skill levels. It’s commonly called “purple prose,” after the expensive and luxurious purple dye employed in early history. You know you’ve got purple prose when you start noticing that your writing is so extravagant and ornate that it draws attention to itself and away from the narrative. And the second the reader starts focusing on your description instead of your story, you’ve lost them.

Let’s take a look at the classic example of purple prose. You’re probably familiar with this one:

It was a dark and stormy night; the rain fell in torrents—except at occasional intervals, when it was checked by a violent gust of wind which swept up the streets (for it is in London that our scene lies), rattling along the housetops, and fiercely agitating the scanty flame of the lamps that struggled against the darkness.

This is the first sentence in Edward Bulwer-Lytton’s Paul Clifford. It’s a biggy, isn’t it? If you’re counting, this single sentence features 9 adjectival phrases. That’s 9 different descriptive phrases in just one sentence. Notice how the point of view sweeps from place to place: first you're looking at rainy clouds; then winds sweeping through streets; then rooftops; and finally flickering lamps. And if you read closely, you’ll realize that this sentence tells you exactly nothing about what’s going on in the scene. Oh sure, it describes some rain and some wind. And as an aside, you learn that the scene takes place in London. But that’s it. And to top it off, this one sentence, featuring 9 adjectival phrases and at least 4 points of view, is the very first sentence in the book!

How can we pare this purple prose down into something manageable? Why not the following:

It was a dark and stormy night, and the wind was rattling the housetops of London.

This sentence gives us the same amount of information as the original sentence does, but now you can read it without your eyes glazing over. We still know that it was dark and stormy, we still know that the wind was fierce, and we still know that we’re in London—but we’ve sharpened the prose into something much more readable. We’ve left the gritty details of the scene to the reader’s imagination and left them personally invested in the process of reading. Instead of giving them the scene on a silver platter, we’ve given them the bare bones, and made them work to fill the rest of the imagery in themselves.

True prose purists might even shorten that sentence to just:

It was a dark and story night.

And leave it at that!

Why is this better? Because it's not distracting. By avoiding purple prose, you keep the reader's attention focused on your story and not the scenery. Let's face it: reading about how pretty a sunset is isn't very interesting. As readers, we care about what's happening to the characters seeing the sunset. For every word you spend describing the sunset you could have described the emotions the characters were feeling, or what they wanted to say to each other, or the guy with a knife sneaking up behind them. The key is that readers care about content, plot, and emotion, not description.

Keeping your writing sharp is essential to keeping your writing readable. Whenever you feel the urge to start writing paragraphs full of description or using adjectives like they’re going out of style, keep our good friend Edward Bulwer-Lytton in mind. Your goal isn’t to tire the reader by exhaustively describing every single detail; your goal is to make your writing flow and pull the reader in by letting them fill in the blanks for themselves.

Sharp prose doesn’t just come from using fewer words, either. Your word choice counts too. If you’re making the reader scramble for a dictionary with every other word, you’ve done a great job of distracting and discouraging them and a terrible job of smooth writing.

Whenever you’re tempted to use an SAT word, try to think if there’s an easier, more common word to use instead. Oftentimes, your prose will be clearer and more easily understood, and the reader will stay happy and keep on reading. That’s not to say that you should never use big words, though. Just like anything, big words are fine when used in moderation—but it’s often a good idea to avoid making your byline "Noah Webster.”

And whenever you’re in doubt about what you’ve written, just remember the immortal word of Ernest Hemingway, the king of economic prose. In response to William Faulkner’s criticism that his writing was too simple, he replied:

Poor Faulkner. Does he really think big emotions come from big words? He thinks I don't know the ten-dollar words. I know them all right. But there are older and simpler and better words, and those are the ones I use.

Whether you like Hemingway’s extremely minimalist style or not, you can’t say that it was hard to read.

Know Your Neoclassicals (And Other Interesting Periods) 9 Blogging Tips: Or, How I Learned To Stop Worrying And Love The Blog