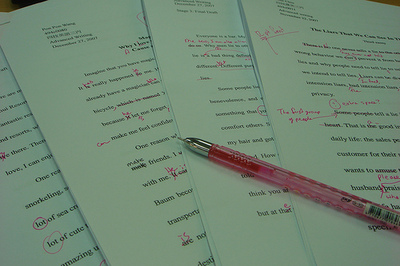 For as long as I live I will champion the rules guarding the English language. Though living languages evolve over time, there are generally accepted guidelines as a means of, well, assuring that we can continue to communicate with one another. If you're writing something that's meant for the eyes of other people, then the assumption is that you want them to understand it. The addition of a single comma can completely change the meaning of the sentence, and even if your audience understands what you meant, the fact remains that they had to waste precious seconds trying to figure it out, seconds that took them out of the flow of the narrative.

It's not an easy thing to master. For one thing, our educational system does a pretty pathetic job of teaching us to tell our gerunds from our predicates (anyone? Anyone? Bueller?) I pride myself on my grammar and punctuation, and I really have no idea what those words mean. That's because, for me, grammar and punctuation have become instinctual. Forget labeling the parts of a sentence. Forget words like 'preposition' and 'conjunctions.' Good grammar is about sound.

I certainly didn't learn anything about grammar from my terrible high school English teachers, most of whom thought that reading half a novel every three weeks was sufficient prep for the Advanced Placement test. I learned about period placement and semicolon usage from my mother. To be more specific, from having my mother correct my Harry Potter fan fiction.

Yes, fan fiction. You've probably seen it before, whether it be based on a book, a movie, a TV show, a video game, or a board game (seriously, there's fan fic for Candyland), and you've probably realized most of it is atrocious. So was mine, when I was first starting out. Then my mother stepped in, and though she insists that even then my writing was genius (it wasn't, I've read it since), she was eager to correct my grammar. Instead of just fixing my mistakes and passing it back to me, she did me a favor - she marked the places that needed correction, but left it up to me to make the changes.

After a few exchanges like this, I started to recognize my own errors. Those little lessons coupled with the books I devoured - like Pride and Prejudice and the Discworld series - taught me right from wrong. Now I don't think much about it - until revision time.  Revision time is when I read my work aloud; if there's a particular sentence that's been bugging me, hearing it out loud can help me identify the problem. If it sounds wrong, that's usually because it is wrong, grammatically. Or it needs a comma, because when read, there's a pause. Listen to your words.

It's all about practice, and you won't master it overnight, but if you try, and you learn to trust your instincts, if you ask for help, then you too can listen to television commercials and correct them when they use 'less' instead of 'fewer.'

If I sound obsessed, it's because I am. I take poor grammar personally, as it seems to me that if you want to be a writer, you ought to have a basic grasp of the language in which you're writing. Seems only fair.

'Why bother?' I've heard people say. 'That's what editors are for.'

And your manuscript has to pass through a number of hands before it ever reaches an editor. Every lap it lands in has hundreds of others just like it to read - which do you think is more likely to get forwarded, the one with random capitalization and an overabundance of ellipses, or the one that person can actually read without interruption?

On behalf of readers everywhere, the little people who go through hundreds of pages a week sifting gold from muck, I implore you to find someone whose sole job is to proofread your copy. Having input on your story structure, plot, characters, or dialogue is invaluable as well, but chances are if you switch tenses more than twice in your opening paragraph, the reader is not going to care how much effort you put into that character's backstory.

Here are a few basics to get you started:

If these are already familiar to you, count your blessings. There are so many writers out there who just never had the chance to learn, and by the time you reach college, professors aren't interested in wasting their time fixing your errors. You could go through the rest of your life wondering why no one is taking you seriously despite your brilliant ideas, and it's all due to an errant apostrophe.

Will poor grammar and punctuation absolutely keep you from getting a book deal? I wish I could say yes, but there's enough printed garbage out there to prove me wrong. All I can say is that despite this being the 21st century, the publishing industry is still very old school, run by people who actually did learn this stuff in high school. Every little bit helps.

A Room of My Own, or Still Seeking the Best Little Coffeeshop in Los Angeles Straight Face, No Chaser