Of Editing And Evolution: Why You Should Find The Perfect Editor 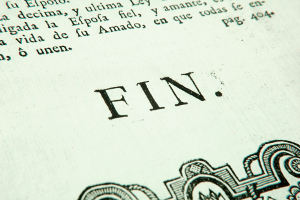 So I edit short works of fiction from time to time, mostly because I’m a nice person. That and I simply love insulting people and having them say “thank you” after I’m done. Call it a kink.

As some of you might know, editing something isn’t a one time affair. You get the story and you read it once without correcting a thing (and God, isn’t that hard sometimes). Then you read it once more, this time unleashing the power of the red font (known in the past as The Red Marker of Doom). When you’re done, you let it rest on your desktop for a day or two and you go read it again, adding more red font. Then you send the story back to the author telling them to fix it.

Now here's where most writers stop. They sent their baby to the editor, editor was mean but offered advice, the writer fixed the problems and voila – the story is ready for love. Only... Not so much.

Technically, what you get after applying the changes and various suggestions from your editor is what’s called a Second Draft, meaning the story isn’t done baking yet. The Second Draft should be sent to the editor for a follow-up, because now that the story looks more readable, the editor can offer some constructive criticism beyond fixing “your stupid” and “their in love” for the 100th time.

The most important and valuable thing your editor can offer you is constructive criticism regarding plot points, character development and the small things that will make the story more captivating for readers. But no editor will be able to offer anything constructive if half the time they have to fix spelling errors, typos and passive voice instead of concentrating on the plot. So promise me something. Promise me that you'll run your story through spell-check before sending it out for editing. It’s a small courtesy, but it will benefit you both.

You might wonder why I’m telling you all this.

See, I believe that finding the right editor is more important than finding “Mr. Right”. I can live with the wrong guy and be in a relationship that isn’t truly fulfilling. But working with the wrong kind of editor? Never, not in million years could that work for me.

Finding the right editor can be hell. An editor that works well with your friend might annoy you to no end, because different people go around editing differently. Me, I start with obvious things first. I won’t correct your spelling, grammar or style of your sentences unless it jumps from the page at me and threatens to burn my eyes. But I work best with people who attempt some self-editing before sending their work to me.

You, on the other hand, might be the type of writer who is terribly insecure about their writing. In that case my style will only scare you. Instead you need an editor who will be nice and patient and diplomatic when pointing out ridiculous plot mistakes. Other writers might need a Grammar or Spelling Nazi for an editor...

The truth is, you might think you know what kind of an editor you need. But it might turn out that the person you’ve chosen to provide criticism doesn’t really help you improve your writing. And improving your writing is the whole point of editing.

You might’ve read how not to write a Mary-Sue and that you shouldn’t use just one character for your exposition and that you should stick to one POV. And armed with all that knowledge, confident in your skill, you go and write your story. Your precious baby that will bring you fame and money and Jensen Ackles’ phone number. Like every writer should, you have a very personal relationship with your stories. But because of how special every story is to you, you’re incapable of seeing any wrong.

And that’s why you need just the right editor to tell you in just the right words that your main protagonist is a Mary-Sue. That your POV is shaky and you should decide who exactly is telling the story. And finally that your main love interest looks too much like Jensen Ackles and you should at least change his name (to Jared, for example) so you’re not too obvious about your crush.

You might end up rewriting the entire story and it might end up something completely different than the first draft. And you might start hating your editor because of the cruel, cold way they are destroying your precious little baby. But once you calm down, get some sleep and some coffee, you'll realize that your editor. Was. Right. And you will go and give your Mary-Sue glasses and a phobia and you’ll get rid of that prophecy, you will rewrite the entire story to tell it from the POV of the Evil Witch and you’ll call the main love interest Sam Forrester (and offer your editor a monthly supply of coffee if they get the brilliant reference).

If you decide to stick with your editor after that first story is edited and done, your second story might suffer similar treatment. But you'll notice, maybe after the third one or the fourth one, that your editor is pointing out different things than in the beginning. And after the fifth and the sixth story, you'll see that corrections are made less and less often. You'll see that you’ve improved. And your readers will notice it too.

So love and cherish your editor, for they are the your light in the tunnel. And if your editor is anything like me, they will appreciate the chocolate cookies you send them for Christmas.

Writing Bootcamp: Writing Whenever, Wherever, Whatever Vacationing in the Ghetto