For literature lovers, hearing the phrase “Oh, I’ll just see the movie instead of read the book” can be pretty aggravating. There seems to be a dangerous yet accepted notion that a film can portray the ideas of a novel just as effectively as the original text can. And though some people realize that that’s not true, the fact remains that many people would rather look at a screen than turn a page. But just how true to the book are Hollywood’s big-budget adaptations? 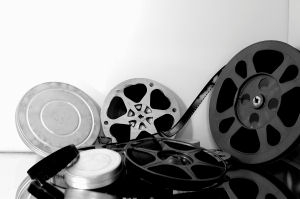 The trend of adapting books to film, though now common, is a little troubling. To be fair, there are some commendable films that succeed in capturing the essence of the literature. Many, however, fall far short. But worse than those that merely fail to live up to a work’s renown are the films that make considerable and detrimental alterations to the spirit of the work.

A prime example of this is the 2007 film adaptation of Beowulf, which falls painfully short of the power and reputation normally associated with the epic English poem. Widely accepted as the earliest work of English fiction, Beowulf can be credited with the introduction of the idea of the hero and his heroic journey. In other words, director Robert Zemeckis had some big shoes to fill when he took on the project of creating a film that would embody such timelessness.

In the poem, King Hrothgar of Denmark (Anthony Hopkins in the film) constructs a magnificent mead hall called Heorot. Celebrations are quickly disrupted, however, when a monster, Grendel, visits Heorot, attacks the celebrants while they sleep, and kills many. The great warrior Beowulf (Ray Winstone) arrives from Geatland to rid them of the monster, and after much fighting he’s victorious. His triumph is short-lived, however, as Grendal’s demon mother comes to avenge her son’s death and kills even more of Hrothgar’s men. Beowulf is again victorious in his battle against her, and ultimately relieves Heorot of its terror. After cultivating the reputation of a great hero, the rest of the poem takes place in Beowulf’s homeland where he becomes a prosperous and beloved king. He finally meets his end in yet another heroic battle, this time against a dragon that has been wreaking havoc on his kingdom.

As is the case with many films that are based on literature, changes in the poem’s plot are easily noticeable when watching Zemeckis’ Beowulf. The writers of the film take great liberty in offering their own interpretation of the epic, as the focus of the film is not on Beowulf as a hero, but rather on a scandal of seduction and deception. In the film, Beowulf’s mother is indeed a demon, but takes the form of a beautiful woman (Angelina Jolie). When Beowulf goes into her lair to kill her, she offers him power, riches, and the position of king in exchange for a son. We then learn that she had previously seduced Hrothgar, and that Grendel was their kid. Beowulf agrees to the bargain, but when he returns to Heorot he lies to the people, assuring them that Grendel’s mother is dead. Beowulf does go on to become king and later battles a dragon, but the dragon is understood to be his son, the outcome of his affair with Grendel’s mother. Does that sound anything at all like the poem to you?

In Zemeckis’ adaptation, one of the most famous stories of heroism and virtue is transformed into yet another hollow Hollywood production. Beowulf is perhaps the most well known character in all literature, yet the film replaces his heroic and noble attributes with dishonesty and corruption. Some may say that the film Beowulf is far from worthy of its name—but those of us who know better than to take the film for face value can still enjoy the poem as it was meant to be read.

The point here is that though some film adaptations stay true to the original story and genuinely try to do the work justice, it’s an unfortunate truism that literature can be easily misrepresented and misinterpreted by film. After all, sometimes it can be a hard job translating an 800-page novel to an hour and a half long film—something has to get cut in the interest of brevity. But for some, the stuff that gets cut or changed is often the best part of the work in the first place.

So the next time you feel like going to see the latest and greatest Hollywood epic or turning on the latest TV miniseries, read the book first—you may discover that the stuff on the page is much better than the stuff on the screen. You can let your imagination run wild instead of having it all done for you on the big screen; you can spend some quality time with the characters, re-read those dazzling descriptions, and mull over the important dialog at your own pace, not the director’s. In the end, the best way to truly appreciate the power of literature is to experience it in its original form!