Why I Miss Ray Bradbury 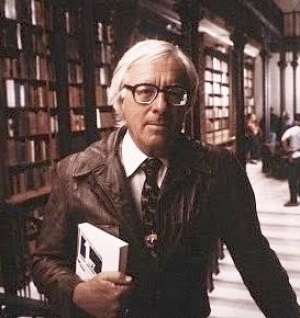 In June of this year, Ray Bradbury—science fiction & fantasy master and my hero—passed away at age 91.

Visionary premise and large ideas reign in the genres of science fiction, fantasy and horror (whose borders Bradbury’s writing seamlessly subverted: “What I have always been is a hybrid author” Bradbury said in 2009). But Bradbury was far more than a brilliant visionary like Clarke, Asimov and Heinlein. He was the undisputed King of Metaphor. His subtle exploration and layered interpretations of the human psyche resonate deeply. At the soul-level.

Ray Bradbury once told me that everything I wrote was metaphor—every single word: from the verb I chose to move a sentence to the name of a character. I remember coming close to tears the last time I watched him speak at a conference several years ago in Palm Springs; when he spoke so eloquently in that homespun sing-song voice about the role of the writer as artist. It resonated so powerfully.

This past February, I wrote an article on Bradbury’s writing as an example of the power of metaphor. The article was entitled “The Martian Chronicles and Other Metaphors”:

When I was but a sprite, and before I became an avid reader of books (I preferred comic books), I read Ray Bradbury’s The Martian Chronicles. It changed me. It changed what I thought of books and what I felt about the power of stories. It made me cry. And perhaps that was when I decided to become a writer. I wanted to move people as Bradbury had moved me.

The Martian Chronicles isn’t really about Mars. It’s about us. Who we are, what we are, and what we may become. What we inadvertently do—to others, and finally to ourselves—and how the irony of chance can change everything.

The 1970 Bantam book jacket so aptly calls The Martian Chronicles, “a story of familiar people and familiar passions set against incredible beauties of a new world … A skillful blending of fancy and satire, terror and tenderness, wonder and contempt.”

Written in the 1940s, the chronicles drip with a nostalgic atmosphere — shady porches with tinkling pitchers of lemonade, grandfather clocks, chintz-covered sofas. But longing for this comfortable past proves dangerous in every way to Bradbury's characters — the golden-eyed Martians as well as the humans. Starting in the far-flung future of 1999, expedition after expedition leaves Earth to investigate Mars. The Martians guard their mysteries well, but soon succumb to the diseases that arrive with the rockets — recapitulating the tragedies that European colonization caused our indigenous peoples. Colonists appear on Mars, most of them with ideas no more lofty than starting a hot-dog stand, and with little respect for the culture they are displacing. Bradbury weaves metaphor into everything he writes, from setting to a character’s name. I didn’t know this when I was a young girl, enthralled by his stories, his characters, his scenes and words. I just responded viscerally to what he’d created.

This is why Bradbury is one of my favorite writers (possibly my very favorite; though he comes close to Thomas Hardy). Bradbury, more than any other writer I know takes the strange—the other—to show us who we are.

The Martian Chronicles prophesized the banning of books, especially works of fantasy, a theme Bradbury would take on fully in the 1953 release, Fahrenheit 451. Inspired by the Cold War, the rise of television and the author's passion for libraries, it was an apocalyptic narrative of nuclear war abroad and empty pleasure at home, with firefighters assigned to burn books instead of putting blazes out.

In the 1967 introduction of his novel Fahrenheit 451 (based on his novella, The Fireman), Ray Bradbury implied that the Nazi book burnings helped compel him to write his story: "It follows then that when Hitler burned a book I felt it as keenly, please forgive me, as his killing a human, for in the long sum of history they are one in the same flesh." For those of you who haven't yet read his novel (one of my favourite books, ever), this cautionary tale explores a fictional future society that has institutionalized book burning in an effort by authorities to maintain order and 'happiness'. In this world, firemen don't put out fires; they start them. By the way, 451 degrees F is the temperature that paper catches fire and burns. The story begins with Montag, an ordinary fireman:

It was a pleasure to burn. It was a special pleasure to see things eaten, to see things blackened and changed. With the brass nozzle in his fists, with this great python spitting its venomous kerosene upon the world, the blood pounded in his head, and his hands were the hands of some amazing conductor playing all the symphonies of blazing and burning to bring down the tatters and charcoal ruins of history...Montag grinned the fierce grin of all men singed and driven back by the flame. He knew that when he returned to the firehouse, he might wink at himself, a minstrel man, burnt-corked, in the mirror.

Bradbury’s cautionary metaphoric tale reminds us that it isn’t just them; it’s us:

In his 1821 play, Almansor, the German writer Heinrich Heine (referring to the burning of the Muslim holy book, the Koran, during the Spanish Inquisition) wrote: Dort, wo man Bucher verbrennt, verbrennt man am Ende auch Menschen—"Where they burn books, they will end in burning human beings." A century later, on May 6th, 1933, Heine's books were among the thousands of volumes publicly hauled out and burned in the streets by the Nazis in Berlin's Opernplatz. A violent outburst that, in fact, did foreshadow the blazing ovens of the Holocaust.

Fahrenheit 451 was Bradbury's only true science-fiction work, according to the author, who said all his other works should have been called fantasy. "It was a book based on real facts and also on my hatred for people who burn books," he told The Associated Press in 2002.

"I'm not afraid of machines," Bradbury told Writer's Digest in 1976. "I don't think the robots are taking over. I think the men who play with toys have taken over. And if we don't take the toys out of their hands, we're fools."

In 2009, during a lecture in a small library in Southern California, Bradbury exhorted his listeners to live their lives as he had lived his: "Do what you love and love what you do…If someone tells you to do something for money, tell them to go to hell."

Good advice, Ray. I will miss you.

Letting Readers In Down the Rabbit Hole