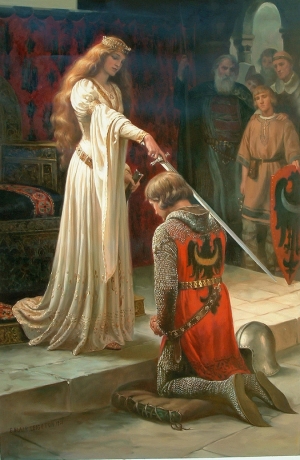 To write a truly compelling story is to resonate with the universal truths of metaphor within the consciousness of humanity. According to scholar and mythologist Joseph Campbell this involves an open mind and a certain amount of humility; and giving oneself to the story...not unlike the hero who gives her life to something larger than herself: "Anyone writing a creative work knows that you open, you yield yourself, and the book talks to you and builds itself....you become the carrier of something that is given to you from … the Muses—or God."

This is no fancy, it is a fact. Since, as Campbell says “the inspiration comes from the unconscious, and since the unconscious minds of the people of any single small society have much in common, what the shaman or seer [or artist] brings forth is something that is waiting to be brought forth in everyone.” I call this tapping into the universal truth where metaphor lives. A story comes alive when these two resonate.

All stories contain common structural elements found universally in myths, fairy tales, dreams, and movies. As writers we are the creators of our culture’s current myths. These are best summarized under “the Hero’s Journey”, which is essentially the 3-act ancient Greek play, handed down to us thousands of years ago. The hero’s journey draws from the depth psychology of Swiss psychologist Carl Jung and Joseph Campbell. In his now classic book The Hero with a Thousand Faces, Campbell describes the hero’s journey as steps of the “rite of passage” of self-discovery and self-integration. To be a hero is to be on a journey home. The hero’s journey is the soul’s search for home, a journey of transformation we all take in some form.

Describing the Hero & Her Journey

The hero is the ultimate altruist, sacrificing her life for the greater good. She is warrior and lover who slays the dragon of the status quo, so to speak. She enacts the ultimate in sacrifice in her quest to change the world (and/or herself) for the better.

Christopher Vogler, author of The Writer’s Journey tells us that writers are storytellers who utilize the principles of myth to create masterful stories that entertain and resonate with our psyche: "The Hero's Journey is not an invention, but an observation. It is a recognition of a beautiful design, a set of principles that govern the conduct of life and the world of storytelling the way physics and chemistry govern the physical world... The Hero's Journey is a pattern that seems to extend in many dimensions, describing more than one reality. It accurately describes, among other things, the process of making a journey, the necessary working parts of a story, the joys and despairs of being a writer, and the passage of a soul through life."

In my opinion, the best stories follow the hero’s journey plot structure. This is because “hero’s journey” stories are transformative for not only the protagonist (our hero) but for readers following along and identifying with her. Stories that pull a reader through the three steps of a human being’s evolution (separation, transformation, and return) promise great depth and fulfillment. This is what great storytelling does: they take us on a transformative journey of learning, through challenges of change to realize a prevailing victory. Writers are the shamans of today and the heroes we write about are our agents of change. Through our artistic drama of metaphor, we make commentary on the world and what it means to be human.

The hero archetype is particularly interesting, given that he or she is essentially us as we journey to prevail over the obstacles of our fears, weaknesses, and disappointments. Every hero is on a quest or mission (whether she realizes it or not). The true mark of a hero is in her willingness to sacrifice something of value, perhaps even her life, on behalf of an ideal or a group and ultimately for the greater good. A hero is the ultimate altruist.

In some versions of The Holy Grail the hero reaches a huge chasm with no apparent way to get across the Grail castle. The space is too great for him to jump. Then he remembers how Grail teaching instructs him to step out in faith. As he puts one foot out into the abyss, a bridge magically appears and he is saved.  Of course, this is all metaphor. Anyone who has left a job, school or a relationship, or fallen in love, has stepped out into that abyss, separating them from the familiar world they’ve know.  The journey and the abyss is often not a physical but a spiritual adventure, as our hero transforms from ignorance and innocence toward experience and enlightenment.  In the end, our hero returns with a gift to the world.

Heroes may be willing or unwilling. Some can be downright unheroic to begin with. We call them anti-heroes. Anti-heroes are notably flawed characters who must grow significantly to achieve the status of true hero. Often the anti-hero starts off more like a villain, like the character Crais in Farscape or Tom Cruise’s character in Rain Man. The wounded anti-hero may be a heroic knight in tarnished armor, “a loner who has rejected society or been rejected b it,” according to Vogler. Examples include Jim Stark in Rebel Without a Cause and Aragorn in Lord of the Rings. The catalyst hero provides an exception to the rule of hero undergoing the most change. This type of hero shows less of a character arc but precipitates significant change or transformation in another protagonist (often the principal narrator). Examples include David Adams in Ben Bova’s Colony or The Illusionist of the same name. In both cases, the main protagonist (the one who changed the most) was another character, affected by the hero’s actions.

In Awakening the Heroes Within, Carol S. Pearson provides further categories for hero-archetypes, including: innocent, orphan, martyr, wanderer, warrior, caregiver, seeker, lover, destroyer, creator, ruler, magician, sage, and fool. As with Vogler’s archetypes, these aren’t necessarily fixed for an individual hero, who may embrace several of these archetypes during his transformation in response to events and ordeals set before him.

The table below shows how Pearson breaks these down into six main archetypes with associated task, plot structure and hero’s “gift”.