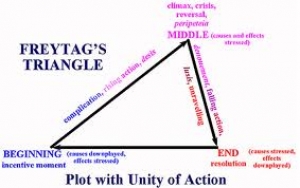 Recently a Scrib writer introduced a thread in the forum that asked about the best way to structure a story. For my contribution, I referenced the classic story chart I’d learned in my 10th grade high school English class. It is a model I have used ever since to plot my own fiction. Characteristically referred to as Freytag’s Pyramid (as it is attributed to 19th century German novelist Gustav Freytag), this organizational template is a classic tool to both explore plot as a reader in an existing piece of fiction or to plan a new story in your role as author.

The seven parts of the chart are as follows*:

Exposition. Here, the writer provides enough information to orient the reader in the world of the story and gives enough details to allow the reader to understand what is happening. This might include details about characters, setting, conflict, and/or major themes. As another Scribber on the thread wisely suggested, however, these days we wouldn’t dump all of the exposition in the beginning as they did when this chart was invented (in the more patient, pre-MTV/Texting/Twitter world), but instead a modern writer would use exposition sparingly in the beginning and spread the rest of the details and backstory throughout the rest of the piece.

Inciting Moment. This is the event that “gets the ball rolling.” The inciting moment takes the story from its original place of stasis and introduces some kind of intrusion that sends the story on its way. In a mystery, for example, the inciting moment is often (always?) the discovery of the dead body. Rising Action. Following the inciting moment, the rising action is the series of events that take the main characters on the journey through the plot points. Typically, this involves the characters being frustrated in their pursuits by a series of obstacles and/or reversals that keep them from achieving their overall goal(s). The detective goes to interview a key suspect, for example, only to find the suspect’s apartment has been ransacked and the suspect is missing. It is these obstacles and reversals, in fact, that keep us reading. Climax. The climax is the moment of highest tension or what I call “the point of no return.” This is when, no matter what has happened in the story, things will never be the same again and the characters cannot go back to the way things were. Romeo drinks the poison. Lenny kills Curley’s Wife. John Proctor won’t sign his confession. Before you comment, let me say that a story’s climax is often a point of commentary and debate among readers. Falling Action. Following the climax, it is the obligation of the falling action to answer any remaining questions, provide resolution to the conflict, and wrap up any other loose ends. In fact, fancy people refer to this as the “denouement,” which is French for “The untying or the unraveling.”

Anti-climax/Catastrophe. These steps are not always present in explanations of this chart, but I like them so I will include them here. In a comedy, the Anti-climax refers to that one last silly or surprising thing that happens right before the conclusion (a letter being found, for example, that indicates that the main characters are long lost brothers or the like), while in a drama the catastrophe refers to that one last awful thing that happens that the hero must deal with before he/she can rest. Action movies from the 1980’s were big on the catastrophe by having a villain we thought was dead rise one last time, guns a-blazing, and the hero must put him down one final time before he kisses the girl (I’m reminded of Alexander Godunov’s final moments in Die Hard).

This chart is not the only approach available to structure your stories, but it does have the benefit of being a classic model used in many of the classics and has, arguably, stood the test of time.

*The illustration accompanying this post uses slightly different terminology, but you get the idea.

Writing Conferences: A Writer’s Magic Door The Evolution of Rejection