How to End Your Story 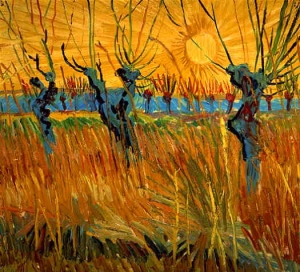 Have you ever seen the movie The Party with Peter Sellers? The first scene is priceless. Sellers plays an actor who is shot in a war scene; he subverts the script by refusing to die. His endless death struggles get so annoying that even the men on his side turn and shoot him.

The last thing you want to do is create an ending or dénouement that struggles in its conclusions. Ultimately, a story’s ending should conclude the story’s plot and theme satisfactorily to the reader. According to Ansen Dibell, author of Elements of Fiction Writing: Plot, successful endings come in two basic shapes: 1) circular and 2) linear. In a writing workshop I recently participated in, Patrick Rothfuss, author of The Name of the Wind, demonstrated two kinds of endings using his hands: for the first kind he clenched his fists in front of him; for the second kind, he opened his hands airily toward his audience.

The kind of ending you choose for your story will depend on the kind of story you are telling: one that rises to a climax or one that returns home.

Beginning and ending connect in a circular story. In such a story, the end and the beginning are much more alike than they are to the middle. This is because the end reflects the promise of the beginning. Framed stories use the same technique, except the beginning and end “frame” are more like bookends, supporting the story from the outside and made of a visibly different structure (e.g., often portrayed in prologue and epilogue fashion and often in different POV, tense, style, etc.).

Circular endings, and their circular stories, are often the shape that quest-adventure stories take on. The main character sets out on a quest to find or learn or accomplish something, passes through trials, and finally succeeds in his mission and returns home with his prize to share (often insight or wisdom). Ultimately, the protagonist grows/changes/achieves then brings that wealth back home to alter his pre-existing everyday life. Full circle. Beginning and end mirror and contrast one another. Circular endings must do the job of showing the hero’s “homecoming”, how she is changed through the turning point in the middle of the story, and what she has brought to the ordinary world to change it.

Linear stories and their endings run more like a marathon up a hill, with slides, diversions and hard climbs, until they reach the summit and climax (the highest point of conflict—and resolution). Once the result of the conflict is achieved, the story is at an end. Most straight adventure stories are of this type.

Roy Peter Clark, author of Writing Tools: 50 Essential Strategies for Every Writer, reflects that “great endings bring back the whole story.” He cites the “reflective ending” of The Great Gatsby, in which the narrator reflects back, pulling together the important narrative threads like a master weaver, to make meaningful conclusions. “A powerful alternative,” adds Clark, “is the ‘narrative ending’, a final scene that crowns the action.” Both types of ending work when masterfully handled. The former is essentially “telling” and the latter is essentially “showing”. You choose. Both work.