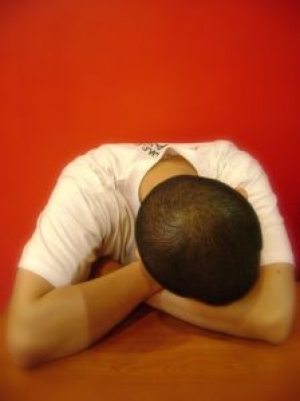 Stacy was just dumped by her boyfriend of four years. She feels numb inside. She wants to scream. Every pore of her body bears the weight of her loss. But wait…the phone is ringing. Her heart jumps into her chest and she hopes more than anything in the world that it is him. It is. He made a mistake. He wants her back. Bliss overwhelms her. A love more pure than the oldest diamond has been restored.

What’s wrong with this story (besides, you know, lacking purpose or anything remotely interesting)? Or, rather, what’s wrong with the character? Unless Stacy has some extreme kind of emotional disorder, this character does not represent a real person. Normal people don’t go through such broad emotional spectrums in such a short amount of time. Normal people don’t have ‘never felt this strongly before’ experiences every day of their lives. This character suffers from a lack of subtlety.

One common critique I offer in my writing circles is to be subtler with emotions and to rely on descriptions rather than adjectives. Stating that someone had ‘never felt worse than he did then’ isn’t really telling me much, unless I know a lot about the character, what the character has been through, and have an expectation of how weak or strong the comparison really is. Instead, what is the character actually feeling? Is it pain? What does the character do? How does the character deal with it? Try taking away all blatant emotional statements (she was sad, for example) from a scene and using action/expression/dialogue in place as a practice.

It's important to be mindful of how severe of an emotional impact a certain occurrence has. Think about if the conflict would really invoke such an extreme emotional response, and then think: is this really the furthest I want to push the character? In longer works, like novels, continually making your character experience extreme emotions will desensitize the reader and there won't be the same response when something worth a tear or two really happens.

It might be helpful to remember that emotions are not just black and white. Something that makes someone happy doesn’t have to light up their world, and something that makes someone sad doesn’t have to tug on their soul. My flight to Los Angeles today was delayed by over an hour. I am mad, and annoyed, but aggravation isn’t permeating my cells. I’m not dwelling on how unfair the world is treating me. It is okay for me to be feel inconvenienced, but at the same time realize I can do something else to make the time pass (like write this blog post).

This isn’t to say that characters can’t exaggerate. People do it in real life all the time. I’m sure you’ve heard someone claim that some experience was the worst they’d ever have, and then you might have heard that same person describe another experience as such some months later. This is fine, and is, indeed, a normal part of characterization. But as the narrator, you aren’t trying to portray how the characters think they feel. If you tell us that “Stacy hoped more than anything in the world" then that’s exactly what you mean. It may sound like you’re creating a way for the reader to connect with the character, but really all you’re doing making the reader insensitive to what you’re character is really feeling (or, rather, what he or she should be feeling).

Take a look at your writing and see how often your characters are far on the end of any emotional spectrum, and ask yourself if that's needed, or the best way to express the feelings meant to come through.

Also, feel free to share your own thoughts on being too emotional in writing, and how to deal with it.