Using the Subtext of Body Language in Storytelling 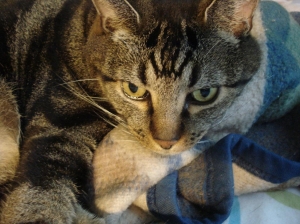 Kinesics is the study of “body language”, which explores how movements and gestures project a person’s hidden thoughts. Blushing is an obvious reaction. But more subtle ones can be used. When body language contradicts verbal expression, tension, conflict and interesting scenarios increase. This is a great opportunity for writers.

In order to accomplish this, the writer must learn to accurately interpret the subtle signals of body language and translate them into the written form. One way is to look at yourself. Ask yourself: what do you do when you’re nervous? Excited? Thrilled? Sad? Angry? How do you do housework when you’re angry? When you’re happy? It helps to look at the same action under different moods to distill out the finer nuances of gesture and movement.

Emotions can be detected by other characters through these reactions: skin, breathing (swallowing), eyes, eyebrows, ears, lips, jaw, neck, shoulders, arms, hands, back, sexual organs, legs and feet. On the other hand, physical areas where a character may feel an emotion but not show it include pain in the body, skin, tongue, throat, heart, stomach, sexual organs, and pulse.

You can use body language imaginatively in several ways. Here are a few:

Body language can either amplify or contradict what is said between two characters. The latter, of course, is usually more interesting, because it sets up tension and underlying conflict.

The following is an example of amplification:

“So, what happened?” Jenny asked, leaning forward and gazing directly at Mark.

“Hey, great to see you,” Dave said, crossing his arms and edging back to slouch against the wall.

Tom wandered to the fridge and opened it to look inside.  “Can I have a beer?”

Dave fixed a hard smile at Tom. “Sure.”

It’s obvious that Dave isn’t happy to see Tom, and his body language contradicts what he said. This makes for compelling reading. Subtext (beneath the surface of dialogue) adds interest and intrigue, particularly when it contradicts or complicates the “overt” verbal message.