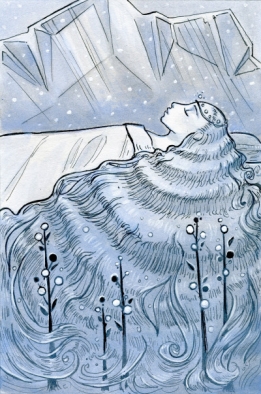 The theme for this contest is the single word “Winter.” There are no genre or style restrictions.

Poetry: Any style, meter, rhyme scheme, or form, but must be less than 150 lines.

Prose: Fiction or creative nonfiction must be no more than 12,000 words.

There are prizes for both poetry and prose categories, so each prize level has two winners. The Grand Prize award package includes cash, publication, and a Lifetime Premium Membership here at Scribophile. See the contest details page at http://SparkAnthology.org/contests/four for the full prize list.

This contest is not hosted by Scribophile, so posting it for critique won’t enter you in the contest (but it will increase your chances of winning!) For full contest guidelines, rules & restrictions, and links to enter your work, see http://SparkAnthology.org/contests/four.

About the Guest Judges

Ken Liu’s fiction has appeared in F&SF, Asimov’s, Analog, Strange Horizons, Lightspeed, and Clarkesworld, among other places. He has won a Nebula, two Hugos, a World Fantasy Award, and a Science Fiction & Fantasy Translation Award, and been nominated for the Sturgeon and the Locus Awards. He lives near Boston with his family.

Liu’s short story The Paper Menagerie is the first work of fiction, of any length, to have swept the Nebula, Hugo, and World Fantasy Awards. His short story, Mono no aware won the 2013 Hugo Award, and his novella The Man Who Ended History: A Documentary was also nominated for a Hugo. (From Wikipedia.)

Bryan Thomas Schmidt is an author and editor of adult and children’s speculative fiction. His debut novel, The Worker Prince, received Honorable Mention on Barnes & Noble Book Club’s Year’s Best Science Fiction Releases for 2011 and was soon followed by additional novels and children’s books. His short stories have appeared in Digital Dragon Magazine, Space Battles: Full Throttle Space Tales 6, and many other magazines and anthologies. As editor, he has worked with many established authors and edited [multiple anthologies], including the forthcoming Raygun Chronicles, expected this month.

Margaret Blair Young has taught literature and creative writing at Brigham Young University since 1984. She has written several novels and short story collections and has won awards including “Best In State” award in the fiction category from the State of Utah, Honorable Mention in the Katherine Anne Porter Short Fiction Contest, and the First Place Utah Arts Council Award for best collected fiction. Her current endeavor is a film to be shot in Zambia called Heart of Africa.

Young is the president of the Association for Mormon Letters.