How Are You Telling Your Story?...Part 2: Voice and Narration 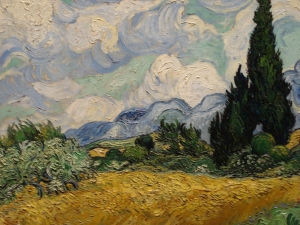 The term “Voice” describes various aspects of a writer’s expression in story; it includes your unique writing style and the style you’ve chosen to adopt for the particular story you’re telling. The voice of your story is influenced by your audience—youth, adults, crazy people, etc.—as well as the subject matter and general overall theme of the story.

Voice is the feel and tone that applies to: 1) the story or book (narrative voice); 2) to each character in that story; and 3) the author’s own voice (authorial voice; in business it’s called the brand), which you carry with you in every work. It is the combination of all these “voices” that make each of your works unique. Think of a fine artist, a painter like Vincent Van Gogh, whose unique painter’s “voice” was apparent in all his Impressionistic works. The wild swirls of light and texture characterized all his paintings; yet, each individual work expressed its own unique message in Van Gogh’s artistic journey.

You express your authorial voice and the voice of your story through tone, perspective, style, language and pace. All of these reflect your intent and are ultimately expressed in the story’s overarching theme. The overarching theme is ultimately the author’s theme, the “world view” — the “so what part” — of the story. The principal character and minor characters will carry variations of the main theme, each with his or her unique voice. Invariably, the voice of the story reflects the author’s philosophy, biases and message.

Writers generally struggle in the beginning to obtain their unique “voice”, often adopting the voice of a writer they admire. Although this can help a writer define their own voice (by illuminating what they like and strive for), it can also retard an author’s unique self-expression. It is so much easier to use another’s proven formula; the danger is that you may never escape from beneath the shadow of your hero. In the area of science fiction, which I write, the internet is rich with “fan fic” (an endearing term for works based on already established stories, worlds, characters, and styles.) Many fan fic writers will not emerge from the shadow of unoriginality to find their own voice.  So, take heed and be mindful of your own voice. Determine what is important to you and you will find your voice.

Narrative voice belongs to the persona telling the story. Which persona you adopt in narration depends on what kind of story you are telling, and the kind of emotional atmosphere you wish to achieve, says Crawford Kilian, Canadian author of over a dozen novels. The persona develops from the personality and attitude of the narrator, expressed through the narrator’s choice of words and depictions. Depending on your choice of POV (see my previous article on Viewpoint), the narrator of your story can be one or several main characters or you, the writer. More on this below.

It’s important to give each character a distinctive “voice” (including use of distinct vernacular, use of specific expressions or phrases, etc.). This is one way a reader can identify a character and find them likeable—or not.

In a manuscript I recently reviewed, I noticed that the characters spoke in a chaotic mixture of formal and casual speech. This confuses the reader and bumps them out of the story. Each person’s speech is typically consistent, reflecting their ethnic and regional background, who they hang around with, their education, history and biases. Consistency is critical; it helps readers identify with a character. They will abandon a story whose writing—and voice—is not consistent. So, my advice to this beginning writer was to pick one style for each character and stick to it.

Voice incorporates language (both speech and body movements), philosophy, and humor. How a character looks, walks, talks, laughs, is all part of this. Let’s take laughter for instance: does your character tend to giggle, titter, chortle, guffaw, belly-laugh? Does she usually put her hand over her mouth when she does? Does she do or say certain things when she’s nervous?  See my previous article on body language for more detail.

Who Should Tell the Story?

When telling a story through the eyes of a single viewpoint character, it makes most sense to tell it through the main character, the protagonist, around whom the story usually revolves. She is the one who’s going to be chiefly affected by the events of the story. Ansen Dibell, author of The Elements of Fiction: Plot, asks the question: “Who is really at the story’s heart?” If you’re having trouble with the story of Sally and Norman from Sally’s point of view, perhaps you should try telling it through Norman’s point of view. Or perhaps your main POV character is a third person, looking on and, in turn, changed.

Narrating a story from an outsider’s viewpoint (the hidden protagonist as observer-narrator) —sometimes called displaced narrative — can also add an element of complexity and depth to a story. The Illusionist is a good example of this. This story, about Eisenheim (the Illusionist) and his beloved, is told through the cynical eyes of the city’s chief inspector, who learns to believe again through his “experience” of their story. Other examples include J.P. Hartley’s The Go-Between, Scott Fitzgerald’s The Great Gatsby, Saving Private Ryan, My Beloved, Charlotte Bronte’s Wuthering Heights, and Joanne Harris’s Chocolat.

Using a displaced viewpoint character to narrate a story works particularly well if you want to keep your main character strange and mysterious. Having an “outside” character tell the story of one or two other characters, also gives the writer a chance to add another thematic element to a story (the one belonging to the narrator). A story told through the eyes of a dreamer will be very different than one told by a ponderous thinker.

Other kinds of narration include:

How Many Should Tell the Story?

The use of multiple viewpoints is common among writers and adds an element of richness and breadth to a story. With each added character’s POV, readers are more enlightened to the thoughts and motivations of characters in a story. When you have several characters telling the story, this is called a rotating viewpoint. A few points to follow include: